We Came, We Saw, We Handed Out Flag Pins

OK, so I should mention the results of our protest yesterday at the ABC/Disney headquarters. It went really well. Consider that I had this idea sitting on my couch at 12:00pm Thursday, and by 4:00pm Friday we had 60 or 70 people out there in Burbank. Considering that in the current age there's almost an allergy to protest, that's not bad (especially in gridlocked L.A.), and we were able to get the word out without making one phone call.

I'll give you the AP's impression:

About 50 people rallied at Disney Studios Friday to protest the questions that ABC News journalists asked the Democratic presidential candidates during a debate earlier this week.

Protestors waved signs that read "Restore the Fourth Estate" and "ABC is TMZ," referring to the online celebrity site.

Organizer Rick Jacobs criticized ABC for focusing on the past gaffes of Sens. Barack Obama and Hillary Rodham Clinton, instead of issues like the war in Iraq and the American economy.

Jacobs said he was offended that Obama was asked why he hasn't worn an American flag pin on his lapel.

"Patriotism isn't defined by a flag pin made in China," he said.

They didn't note the most important part of the protest: our distribution of flag pins to employees as they left the ABC gates. Letting them know that they were getting "free patriotism on a stick" and telling them that "Charlie Gibson won't approve of you unless you wear one," we handed out about 300 pins. Most took them graciously and approvingly.

I'll direct you to where there are a bunch of pictures and then highlight a few. 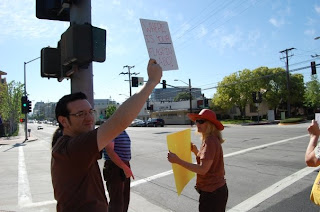 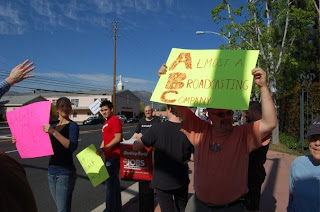 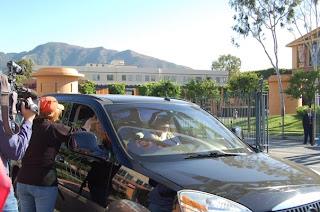 There goes a flag pin. 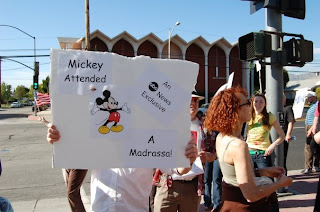 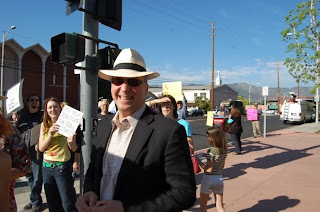 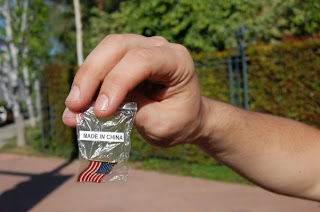 Yes, the pins were made in China.

Thanks to everyone who came out...