The conservative radio commentator came into the jail at about 4 p.m. with his attorney Roy Black and bonded out an hour later on a $3,000 bail, Barbera said.

Prosecutors seized Limbaugh's records after learning that he received about 2,000 painkillers, prescribed by four doctors in six months, at a pharmacy near his Palm Beach mansion. They contend that Limbaugh engaged in "doctor shopping,'' or illegally deceived multiple doctors to receive overlapping prescriptions. 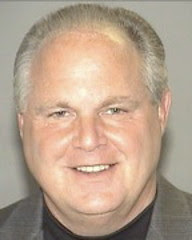 Not quite the sunny disposition of a Tom DeLay mugshot, but an affable convict, nonetheless.

This is actually the culmination of a deal for Rush, as the charges will be held in abeyance and dropped within 18 months "if he follows the law." He does have to enter a guilty or no contest plea, eventually. But he got away with this, make no mistake.

I guess it's mean to call attention to a guy's drug problem. Well, I say when that guy says all drug users should be "sent up the river," then he cops a plea to avoid jail time for the same crime, all bets are off.