You Don't Get To Leave This Sinking Ship I Torpedoed!

President Bush said Wednesday he wants Defense Secretary Donald Rumsfeld and Vice President Dick Cheney to remain in his administration until the end of his presidency, extending a job guarantee to two of the most criticized members of his team.

Bush, in an interview, also said he was determined that sanctions imposed against North Korea must be applied even though Pyongyang has agreed to return to six-nation nuclear disarmament talks.

And Bush said he did not foresee a change in the immediate future in the number of U.S. troops in Iraq. "They've got what they can live with," Bush said [...]

He said he valued Cheney's advice and judgment. "The good thing about Vice President Cheney's advice is, you don't read about it in the newspaper after he gives it," the president said.

Bush credited Rumsfeld with overseeing wars in Iraq and Afghanistan while overhauling the military. "I'm pleased with the progress we're making," the president said. He replied in the affirmative if he wanted Rumsfeld and Cheney to stay with him until the end.

Actually I think this Presidency is in its last throes. Which, by Cheney-logic, means it'd go on forever, so I'd better come up with a new term.

How remarkable is it that the QUALITY of the Vice President's advice is completely unimportant compared to the LOYALTY factor? It could be "bomb Spain" as long as it doesn't get leaked to the press. Secrecy is more important than competency to these guys.

The real legacy of the Bush-Cheney-Rumsfeld co-presidency will be felt ages and ages hence. This graphic is truly amazing. 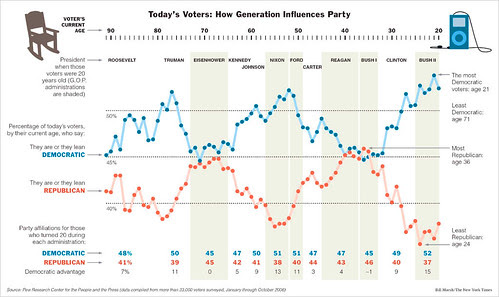 Basically whoever is President when you turn 20 has a major impact on how you vote for the rest of your life.

So, history will judge. Because the people in their formative years living through this part of history won't forget it when they go to the ballot box for the next 5 or 6 decades.