It's a little disturbing how often Tom Cruise's name has come up in the CIA Leak Investigation. First he met with Richard Armitage only a couple hours after the former deputy Secretary of State leaked Plame's identity to Bob Woodward. 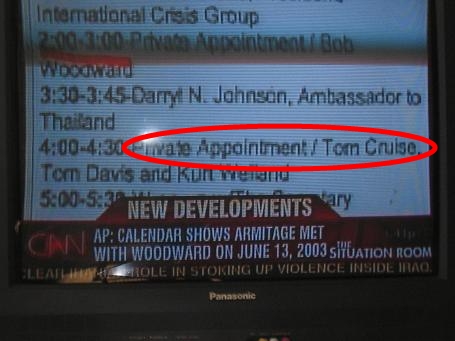 Then, just yesterday, we learned that Scooter Libby ALSO met with the Thetan-5, and his then-squeeze Penelope, around the time of the Wilson op-ed, meeting to talk about the treatment of Scientologists in Germany. And Libby was "very excited about it." 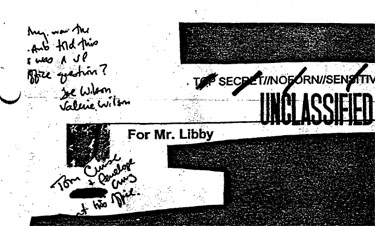 Clearly, Cruise is implicated. Deeply. But why? What was going on in 2003? Why did Cruise talk to Tim Russert and Matt Cooper? Why was he on that AF1 flight to Africa with Ari Fleischer? Was jumping on the couch on Oprah a signal that he was throwing Plame under the couch? Was he doing research for The Last Samurai (2003) by asking Libby about his novel, where the brothers of a dead samurai has sex with the samurai's daughter?

I want the truth! (you can't handle the truth)

...OK, in actual Libby trial news, Cathie Martin's testimony was devastating today. She basically said that Libby lied about when he heard that Plame worked for the CIA, which is pretty much the charges in the case. As always, Firedoglake is the best place to go for minute-by-minute descriptions of testimony. And there's a nice profile of Marcy Wheeler (emptywheel) in The Ann Arbor News today.