Rep. Rick Renzi, a member of John McCain's leadership team, has been indicted on fraud charges regarding shady land deals in Arizona.

The indictment stems from plan by Renzi and an associate to benefit from a land-exchange plan in order to receive Renzi's support for necessary federal legislation, court documents said.

"It was an object of the conspiracy for Renzi to enrich (his associate) and personally benefit himself," the indictment said.

CREW has the indictment here (PDF).

Very little was known about Renzi prior to getting elected to Congress. He moved to Arizona only a year before his first election in 2002. He said he worked for the Defense Department overseas for a time but there's no record of it.

If he was the CIA's mole in Congress, he was obviously from the Dusty Foggo school of ethics.

The company you keep... 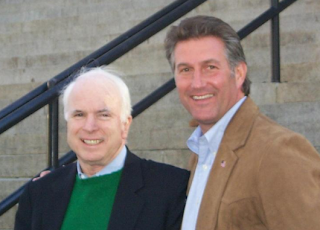