For years the editor of all Coen Brothers movies has been listed as "Roderick Jaynes." The filmmakers describe him as an English recluse who came out of retirement to work for the Coens after a long career in England. He lives in Haywards Heath. Of course, there is no Haywards Heath, and there is no Roderick Jaynes. The entire persona is a figment of the Coen Brothers' fertile imagination; they edit their own movies.

Jaynes has been nominated for two Oscars, including one last night. In 1996, when he was honored for Fargo, I don't think they showed a photograph, but last night they did: 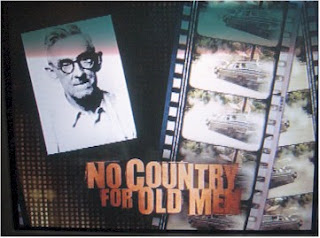 There have been several aliases who have received Oscar nominations (mostly in the era of the blacklist), but Jaynes is the first fictional character to receive any.

Here's an old interview with Jaynes from 2001.

I think I'm going to put "Broderick Raines" on my future editing projects.

How did the fictitious Jaynes, whom the Coens describe as a cranky British recluse in his 80s, take the loss? "We haven't talked to him," Ethan Coen said backstage. "We know he's elderly and unhappy, so probably not well."