Take a look at these pictures and you recognize that something is very different about this Obama campaign and how restorative it can be for our relationship with the world. 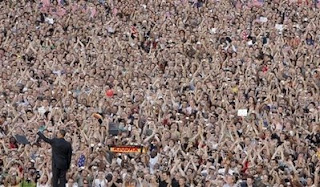 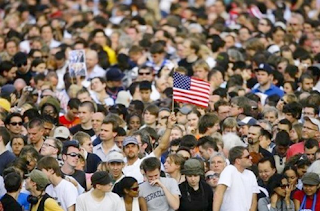 There's limited value in this iconography in and of itself, but clearly Europeans are excited to have an American leader with whom they might work in concert. And the speech was very good in its own right, a message that weaved Obama's personal history, the kinship between the United States and Germany dating back to the Berlin Airlift, and how that kinship - a multilateral coming together of nations - can meet the challenges of this century and triumph over them.

Yes, there have been differences between America and Europe. No doubt, there will be differences in the future. But the burdens of global citizenship continue to bind us together. A change of leadership in Washington will not lift this burden. In this new century, Americans and Europeans alike will be required to do more – not less. Partnership and cooperation among nations is not a choice; it is the one way, the only way, to protect our common security and advance our common humanity.

That is why the greatest danger of all is to allow new walls to divide us from one another.

We know they have fallen before. After centuries of strife, the people of Europe have formed a Union of promise and prosperity. Here, at the base of a column built to mark victory in war, we meet in the center of a Europe at peace. Not only have walls come down in Berlin, but they have come down in Belfast, where Protestant and Catholic found a way to live together; in the Balkans, where our Atlantic alliance ended wars and brought savage war criminals to justice; and in South Africa, where the struggle of a courageous people defeated apartheid.

So history reminds us that walls can be torn down. But the task is never easy. True partnership and true progress requires constant work and sustained sacrifice. They require sharing the burdens of development and diplomacy; of progress and peace. They require allies who will listen to each other, learn from each other and, most of all, trust each other.

That is why America cannot turn inward. That is why Europe cannot turn inward. America has no better partner than Europe. Now is the time to build new bridges across the globe as strong as the one that bound us across the Atlantic. Now is the time to join together, through constant cooperation, strong institutions, shared sacrifice, and a global commitment to progress, to meet the challenges of the 21st century. It was this spirit that led airlift planes to appear in the sky above our heads, and people to assemble where we stand today. And this is the moment when our nations – and all nations – must summon that spirit anew.

This is a simple call for a foreign policy that respects allies and listens to the breadth of opinion; that moves forward with humility but with the common purpose to share wealth, reward work and stand on the side of restoring this planet's resources and protecting the human rights of all citizens; and that makes a profound call for the end of a world with nuclear weapons, which, incidentally, I don't remember ANY other Presidential candidate doing since the invention of the atomic bomb.

The current President, meanwhile, banned State Department officials from attending the speech. And the other guy running for President had lunch at a German restaurant. Only one of the three attempted to lead today.

I agree with Meteor Blades. This is now the benchmark for how an American leader conducts himself on foreign soil.

Greg Sargent has some other good analysis.

UPDATE: Yes, Ezra is right to mention the inordinate amount of time spent in the speech on the Berlin Airlift, a story recounted in Andrei Cherny's new book The Candy Bombers: The Untold Story of the Berlin Airlift and America's Finest Hour. I think the reason for that is that it was an example of the exact opposite foreign policy of the Bush Administration - showing how we can best our adversaries by raising to our highest ideals, by helping people rather than harming them. If this is the model for an Obama foreign policy I'm all for it.