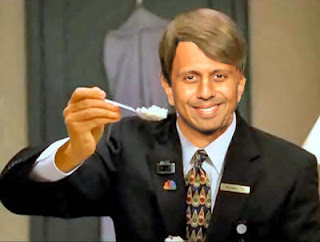 Bobby Jindal's dismissive reference to "volcano monitoring" was plain stupid. Disaster preparedness is obviously something we should fund, and someone who runs a state that was recently devastated by a natural disaster should know that. Proper volcano monitoring can save thousands of lives and millions of dollars. And this is made more urgent by the fact that there is an active volcano about to erupt in Alaska, and residents are being evacuated, thanks to the monitoring systems.

I happen to have a weird stock of knowledge about volcanoes thanks to a show I edited on Yellowstone and the giant caldera underneath the park. This is very serious and dangerous stuff, and the knowledge about when a volcano may erupt would be the difference between life and death for an untold number of people.

It's more of the anti-science talk that is driving Republicans into the furthest recesses of extremist irrelevance.

But both sides, I thought, agreed that the government should provide public goods — goods that are nonrival (they benefit everyone) and nonexcludable (there’s no way to restrict the benefits to people who pay.) The classic examples are things like lighthouses and national defense, but there are many others. For example, knowing when a volcano is likely to erupt can save many lives; but there’s no private incentive to spend money on monitoring, since even people who didn’t contribute to maintaining the monitoring system can still benefit from the warning. So that’s the sort of activity that should be undertaken by government.

So what did Bobby Jindal choose to ridicule in this response to Obama last night? Volcano monitoring, of course.

The intellectual incoherence is stunning. Basically, the political philosophy of the GOP right now seems to consist of snickering at stuff that they think sounds funny. The party of ideas has become the party of Beavis and Butthead.