No Economists On The Teevee

Turns out that the traditional media doesn't put a premium on informing the public. Over the last month, which has been dominated by debate about the stimulus package, the experts most likely to be able to actually perform the debate in a credible and intelligent manner, economists, haven't been on the scene.

In the hour following President Obama's February 9 press conference -- during which he gave a brief address about the economic recovery legislation currently moving through Congress -- cable news programs featured guests and panelists to discuss Obama's remarks. But CNN, Fox News, and MSNBC did not bring on a single economist to discuss the plan. The absence of economists in the post-press conference discussion was consistent with the observation made by Crooksandliars.com founder John Amato in a February 4 article on The Huffington Post: "I'm sure you've heard about the hundreds of economists that are either for or against President Obama's stimulus plan. My question to the media is: Where are they?" Indeed, a Media Matters for America review of the Sunday talk shows and 12 cable news programs from January 25 through February 8 found that during 139 1/2 hours of programming on Sunday mornings and weekday afternoons and evenings, of 460 total guest appearances in discussions about the economic recovery legislation and debate in Congress, only 25 were made by economists -- a mere 5 percent.

Economists actually differed wildly on the stimulus, and had their own biases that they brought to the debate. But surely that would be a debate grounded more in facts than what we currently see on the teevee. Of course, economists aren't adept at determining whether Obama flipped the bird to Hillary Clinton when he was scratching his nose, or how Obama's body language signifies his belief in civil rights, so they are kind of useless on cable. John Amato and Digby have more.

U.S. Rep. Steve Austria said he supports a scaled-down federal economic-stimulus proposal, but the Beavercreek Republican told The Dispatch editorial board that the huge influx of money into the economy could have a negative effect.

That is just history, with the added invention of a time machine so that Roosevelt could return to the 1920s and be President when the stock market crashed. Now, this was such a stupid statement that Austria had to walk it back, but there are hundreds more little white lies that come up from the know-nothings, which the media turns into a debate worthy of broadcast entertainment. But it lacks one thing - precise information.

Many liberal economists say that shows the virtue of boosting spending. Dean Baker, co-director of the Center for Economic and Policy Research, said that "when Roosevelt came in, he started spending money, and from 1933 to 1937 the economy grew at a double-digit annual rate. It was soaring, and the unemployment rate fell at 4 percentage points a year."

But in 1937, the economy started tumbling backward again. Drawing an analogy to today's fiscally conservative Democrats in Congress, Baker said Roosevelt "listened to the Blue Dogs of his day and cut spending, and the unemployment rate rose again." 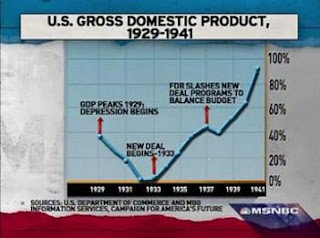 I got that from Rachel Maddow's show, the oasis in the cable desert.