I like the new feistiness from President Obama, as seen through chief nerd Peter Orszag's recent comments, among others.

At a recent lunch with reporters, Budget Director Peter Orszag was asked if he could name a useful idea submitted by Republicans. He couldn't -- and didn't even pretend he'd considered many. When House Republicans put out a budget last week, Press Secretary Robert Gibbs said, "The party of no has become the party of no ideas."

Gibbs probably wouldn't have said that 40 days ago, when the White House was treating the issue of bipartisanship more carefully. But after party-line votes in the House and Senate and minimum flexibility from GOP leaders, Obama aides say that Republicans are not "acting in good faith." Which leads them to two conclusions: One, their acts of conciliation buy them nothing in negotiations with the GOP; two, and more important, they've decided they'll pay no political price for acting in a more partisan fashion.

As Steve Benen notes, the current tactics from the President have yielded no results from the Republican caucus; if anything they've dug in deeper since the election. The midterms are 19 months off and will probably be measured by the state of the economy at that time, so Republicans probably WON'T pay any price for their obstruction. And that obstruction is historic in nature.

Ah, the U.S. Senate—the world’s greatest deliberative body. The chamber designed to be, as George Washington famously described it to Thomas Jefferson, “the saucer into which we pour legislation to cool” the hot tea from the cup of the House of Representatives. It is a body set up to make it difficult to enact laws, with a tradition of unlimited debate and a deference to the intense feelings of the minority over the more casual will of the majority.

Newt (Gingrich) saw nearly all his initiatives, including much of the Contract with America, disappear in the Senate Bermuda Triangle. Gingrich’s problems with Dole and his Senate were both predictable and par for the course. But the Senate today is showing signs of getting even more difficult to deal with. The Senate has taken the term “deliberative” to a new level, slowing not just contentious legislation but also bills that have overwhelming support.

The Virginia Tech bill is a dramatic example, but it is far from the only one. A bill to require senators to file their campaign finance reports electronically—something done for years by members of the House, presidential candidates, and nearly every legislative body out there—has been the victim of revolving holds for months on end. A widely supported ethics and lobbying reform bill was pushed back several times and nearly derailed by a hold placed by Senator Jim DeMint (RSC). A bill to repeal President Bush’s executive order allowing presidents to shield their papers from public view for decades after they leave office has been held up by Senator Jim Bunning (R-KY)—who stepped in after a months-long hold on the bill by Coburn was finally lifted in September.

The rules have simply modified to the point that the Senate really cannot get its business done almost at all. And the filibuster is now routinely Administered, far more than in the past, as you can see in this chart: 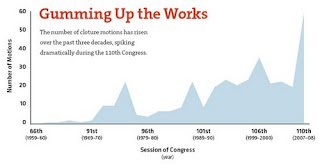 If you want to understand why the earth is likely to heat and why comprehensive health reform is unlikely to pass and why the government is increasingly letting the Federal Reserve govern its response to the financial crisis, that graph basically tells the story.

I'd take issue with Ornstein on one point: He argues that "the problems here are less the rules and more the culture. And that is not going to change anytime soon." But that's fatalism. Imagine a classroom in which all the children are polite and they can talk whenever they wish. Now imagine that order breaks down, the children grow rude and combative, and the classroom devolves into cacophony. You wouldn't say that we need to wait for the children to be polite again. You'd say we need to change the rules so they're responsive to the behavior of the participants.

If filibusters are now going to become simply a routine instrument to obstruct the will of the majority on even enormously popular issues, with the entire minority willing to hang together, you have to wonder about its utility. Which is why the battle over budget reconciliation is so important. The President yesterday told Democratic leaders that "If we don’t pass the budget, it will empower those critics who don’t want to see anything getting done." That's true. And major investments in health care, education and energy are intrinsically tied up with that budget. If the only way to get them done is to place them in a process where they cannot be filibustered, then so be it. The people called for change last November and they deserve it, indeed they will be in dire straits without it. The rules of a legislative body cannot be held above the good of the country, not anymore at least.