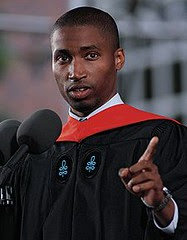 The race to replace Rep. Ellen Tauscher in Congress received a jolt yesterday with the announcement of Lt. Gov. John Garamendi that he expects to be a candidate for that seat. And just today, Joan Buchanan has decided to enter the race as well. But these are not the only candidate poised to jump into the race. Yesterday, I had the opportunity to speak with Anthony Woods, a young West Point graduate who served two tours as a platoon leader in Iraq. Woods was born in the district on Travis AFB in Fairfield, to a single mother who worked as a housekeeper. He was raised in the area, and after his stint at West Point, he volunteered and took command of two separate platoons that shipped out to Iraq, once in 2004-05 and again in 2005-06, engaging in service for which he received the Bronze Star. Returning to the states, he took graduate studies in public policy at the Kennedy School for Government at Harvard, and in his second year, he entered into a relationship that made him realize the absurdity of the military's Don't Ask Don't Tell policy. Tired of shutting down his gay identity and hiding himself, he came out to his commander - "I wasn't going to lie about it anymore" - kicking off a lengthy investigative process that resulted in an honorable discharge (for "moral and professional dereliction of duty") in December 2008. Woods was also forced to pay back his education benefits. (A full bio on Anthony Woods can be found here.)

Here is someone willing to serve his country, able to perform honorably on the battlefield, yet because of his identity as a gay American cannot be a member of the military. The insanity of this official policy has been well-documented around here. What is striking about Woods is that he foregrounds the concept of service instead of the injustice of the policy, and would rather not dwell on that incident but instead find a new way to serve. He is close to making a decision on whether to enter the 10th District race, and on the flip, you can read a paraphrase of the rest of my interview with him.

Calitics: I suppose there's a tension between having this incredibly compelling story and not wanting to be pigeonholed into being "the gay candidate" or the "Don't Ask Don't Tell" candidate. How will you smooth over that tension, if you choose to run?

Anthony Woods: I think it's much more important to the people of this district that I didn't have health care until I was 18 years old. I believe the Don't Ask Don't Tell policy is wrong, and I won't shy away from taking strong stands, but I don't want to be seen as a single issue candidate. All of my life experience will help me, from being raised by a single mother to not having health care to having to strive for a good education to my experience with veteran's aftercare to my service in Iraq.

Calitics: Let's talk about Iraq for a second. You served two tours there. What do you think of the President's policy, to honor the status of forces agreement and commit to a full withdrawal of all forces by the end of 2011? Is that too soon, not soon enough?

AW: I think the President's policy is right on point. The end of 2011 gives us enough time to wind down this war. I didn't support the war from the beginning - I entered the conflict to bring my platoon home and to serve my country. In 2008, at my commencement address at Harvard I questioned the war and some people didn't like that. But I have always believed that the longer we stayed, the longer we would delay that sense of urgency among the Iraqis to make the choices necessary to take responsibility for their country. So setting a definite timeline of leaving will provide that internal pressure for the Iraqis to reconcile.

Calitics: The Senate Armed Services Committee released their long report about interrogation tactics by the military, and this is the latest in a series of disturbing disclosures about torture. How do these reports make you feel, as someone who served, and what do you think ought to be done in the name of accountability?

AW: You know, I first got to Iraq shortly after the revelations at Abu Ghraib, right after our reputation in Iraq and around the world was sullied. The tactics undertaken by the previous Administration directly put me and my soldiers at risk. They did not make us safer at all. I'm glad that the President put the memos out there, so we can all see the truth. At first I agreed with the decision of the President not to go after CIA personnel who followed orders they believed to be legal by the Justice Department, but with the more facts that come out, I think there's a major need for accountability. Someone needs to have a reckoning for these actions committed in our name. I'm very big on accountability and trust.

Calitics: Have you made a final decision yet on running in this race?

AW: I haven't made a final decision, but I'm real close. If I do decide to run, I will make this race about issues that are personal to me. The challenges we face today are not new, you can see them over the last 30 years. The struggles I faced early in life are the same struggles families are facing right now. The fact that I didn't have health insurance until I was 18, or that my mom's premiums are skyrocketing today, these are all the same problems. And I think there's a need for some new leadership around them.

Calitics; Let's talk about health care, since you have personal attachments to the issue. What would you like to see in a major health care reform?

AW: I support universal health care with a public option. I would like to see an increase in SCHIP to cover all children, an early buy-in for Medicare, maybe at 55 years of age, and subsidies for those in the middle, so they can purchase quality health insurance. And everyone should have that public option so that they don't have to rely on a private insurer that may deny them coverage for a pre-existing condition. I think this is a major issue for families, but also a huge issue for businesses, who have such a burden of health care costs that it's stopping them from being competitive.

Calitics: How has you experience with the VA system colored your sense of this issue:

AW: Very much so. Veteran's aftercare is in kind of an ugly state right now, so I wouldn't want to model the VA system completely. But I do think we can address a lot of the bureaucratic slowness in that system and apply it to the overall health reform.

Calitics: Another big issue we're seeing debated in congress is energy. The legislation being debated in Congress right now is massive, and includes renewable energy standards, cap and trade, etc. I don't want you to have to summarize the whole thing, but what parts of energy policy are important to you?

AW: You know, having been to Iraq, I would say it's not out of the question that a big reason why we were over there instead of other trouble spots in the world is because of their oil reserves. The case can be made. And so I would like to stress that our national security is tied up with our energy security. We have to move beyond the dependence on fossil fuels like oil. Offshore drilling is just a band-aid, it will not solve the problem. I think we have to look to other sources of energy like wind and solar and biodiesel, and it's crucial to our national security in the future.

AW: Since I left the district, I've lived in places like Boston and Washington, DC, where there is a major focus on public transportation and mass transit. California definitely needs to focus on that, and we need that right here in this community. I also like what you're saying about smart growth. We can build commercial space closer to where people live, and through information technology we can increase telecommuting. There are a whole number of ways to decrease commute times and reduce greenhouse gas emissions. We need to invest in things like high speed rail, in infrastructure projects that also have the added benefit of aiding our environment. Obama did a good job in that aspect in the stimulus package.

Calitics: Last question. Obviously, there's a lot of attention in this race, from the likes of State Senators and State Assemblymembers and even the Lieutenant Governor of California. You've never held elected office. What will be your pitch to people in the 10th to give you the opportunity to serve?

AW: We're at a time when we're frustrated with the solutions we have, but we keep sending the same politicians back to Washington to work on those solutions. That doesn't make sense to me. I have respect for everyone who will be in this race, but these are old problems that have not been solved by the same people. It's time for a fresh perspective, and new energy, and a new generation of leadership. That's what I believe we saw with Obama's election last year, and that's what I think people are still wanting to see. And while I think that elected office is obviously important experience, I'm also coming at this with a different set of experiences. I was a platoon leader in Iraq, I have taken strong stands in my life, things that cost me personally. I have dealt with the health care system, the veterans aftercare system, the education system. I believe I am ready to serve this district with courageous leadership drawing on my personal experiences.

Calitics: Thanks for your time.