I have been seeing a movie on Christmas Day for several years now, and judging from the crowds at my local movie houses, a lot of patrons joined me. I managed to avoid the record-setting Marley and Me, but I did take in a double feature.

Slumdog Millionaire was a fine enough fairy tale, but I forgot everything about it the minute I left the theater. The art direction, cinematography and editing were excellent, but overall the story left me as cold as something like "Billy Elliott" or "The Full Monty" did (I wasn't too surprised when I saw it had the same writer from "The Full Monty"). It was your typical crowd-pleasing, coincidence-laden bit of treacle, without much beyond the surface and an interwoven Mumbai mob plot right out of your below-average B-level Tony Scott film. Also, I think the shaky-cam hyper-real look has worn out its welcome (although this could be because we were late to the crowded screening and sat in the third row). That said, I found it enjoyable when I was watching it, and the closing Bollywood musical number almost redeems everything.

Now, by contrast, The Wrestler is a grounded, authentic story, even if it is fairly archetypal. The acting, in particular by Evan Rachel Wood and the astounding Mickey Rourke, is top-notch, and the story of a past-his-prime wrestler living a rootless and searching existence was extremely compelling. The themes of loneliness, self-destruction and fame all make for a great crescendo, albeit a slightly predictable one. Darren Aronofsky is no stranger to style-over-substance flair (Requiem for a Dream, Pi) and yet the film's look is restrained while remaining oddly pretty.

Two additional things. The Arclight in Hollywood now has "21+" screenings where you can buy a drink at the café bar and bring it into the theater, which make so much damn sense I don't know why it isn't the rule across the country. It was a bit jarring to have the bartender unaware that we were headed into the screening 10 minutes before we began and giving us our order in glasses instead of plastic, however.

Second, the opening title sequence to The Wrestler consisted of a pan across a series of fliers and magazine articles and memorabilia for the career of Rourke's character Randy "The Ram" Robinson, and in it, title designer Kristyn Hume revealed my secret life as a fictional wrestling star: 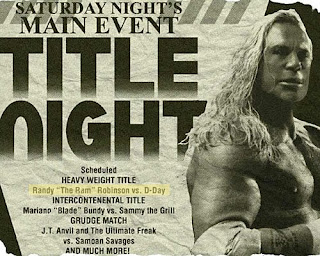 I totally kicked his ass in that fight, although he brought a foreign object in the ring for the win. Let's just say that now you know why Randy the Ram needed all that creepy plastic surgery.