If you start out on just the level of conservatives out in the world you get some pretty insane people. Then when you move into the subset of conservative politicians and activists, the insanity stretches even further. Once you hit conservative BLOGGERS, you're in some other kind of dimension. Look at this thing from the folks at RedState. 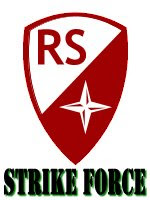 I guess this is supposed to be for their online field organization, but to me it looks like some sort of crest for LARPing, which as Bradrocket says is something of an unfair characterization of LARPers. Either way, there is a way for these folks to get uniforms and deadly weapons and have all sorts of fun running around and destroying the enemy. It's called the military. Somebody get them directions to the nearest recruiting office.

John Cole gets in on this fun as well.

The key to electoral success for the GOP is not an elite strike force of blithering idiots spamming everyone’s email with bullshit about Obama’s birth certificate. The nation doesn’t need a trillion twitters about William Ayers, they need a Republican party that isn’t batshit insane. Spending all this time pretending the only problem is insufficient text message spam is going to get you nowhere, because the reason we elected a bunch of Democrats the last couple of years is because the Republicans and their ideas suck.

A few days earlier, this new RedState front-pager made a complete fool of himself with the lugubriously over-the-top rhetoric:

RedState is not the corner malt-shop, some nickel and dime agitprop echo chamber. RedState is the biggest mover and shaker in the right-blog universe, and the Directors and Contributors here are one high-profile, professional bunch of political thinkers and operators. It is no exaggeration to say that things said and done on RedState affect votes and debates in Congress.

It is no exaggeration to say RedState controls the agenda of this and many other small countries, and one word typed out on their powdered-sugar-stained laptops can cause the mountains to fall and rain to actually reverse course and go back up into the heavens. Do not taunt RedState. Avert your eyes, people. Avert.