Wingnut populist of the nation united yesterday for a mass action of tea parties that shook the government to its knees. OK, its ankles.

Remember all those "Chicago Tea Parties" Americans were supposed to participate in, taking out their righteous anger against Obama's anti-American economic plans? It was supposed to the be first wave of Americans taking to the streets against socialism, the birth of the New Minutemen.

The results? Not so impressive.

Let's see...a whopping 79 people showed up today in Jacksonville, FL. Looks like maybe over a dozen showed up in Asheville, NC. Almost 10 people made it to the Buffalo, NY, protest. About 100 people throughout all of Los Angeles came out to Santa Monica Pier. All of about 300 people made it out throughout the entirety of Atlanta. 250 made it out to Dallas for the tea party there. 150 in Lansing. Looks like about 100 went to watch the Joe the Plumber and Michelle Malkin teabag fest in D.C. (if you had to retch, it's not my fault, just your dirty, dirty mind...)

The very best numbers these jokers managed to pull was 1,500 people in St. Louis, and somewhere between 500-1,000 in Chicago--if reports from the organizers are to be believed.

Dave Weigel was on the scene in Washington - where thousands of CPAC activists were already gathering and yet only 100 were willing to trod their butts out in front of the White House. I don't even know what to say about this. 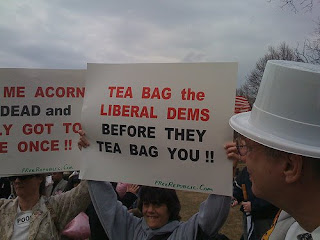 Now, I've put together things like this. They're not easy to coordinate. Especially when your entire movement is composed of armchair ranters who are more comfortable typing about what other people are doing. Of course, I didn't have huge wingnut email lists behind me. And when you fall this flat, you don't brag about it, using the line "fiscal responsibility is the new counterculture." Yeah, man, they're doing their own thing, baby! Free love and cuts in the capital gains tax!

And Glenn Reynolds used the opportunity to reminisce about Lebanese protest babes. Computer cleanup at the Univ. of Tennessee Law School, I imagine.

This is what's left of the conservative movement. Their folk hero is an unemployed plumber who is quickly wearing out his welcome with the general public. Their new mascot is a 13 year-old kid which some kind of hyperactive disorder who's two years away from being permanently stuffed in a locker for his entire high school career. Their key innovations to the policy debate include questioning the President's citizenship and wondering what "volcano monitoring" means. Their formal leader is a black guy to which their membership feels comfortable saying You be da man, probably because he is some sort of parody of a black man himself, the kind of guy who vows an "off the hook" public relations offensive. Their response to the worst economic crisis in the past 70 years is to throw a tea party. And their spiritual guru, the man who is as singularly powerful as anyone in the movement, is a drug-addled radio talk-show host who hopes the country fails.

Is this a political ideology or a circus?