Late last week, Democrats temporarily shelved a bill that would allow bankruptcy judges to modify the terms of mortgages on primary residences (also known as "cram-down"). Moderates who put the hold on this legislation, particularly former Wall Street investor Ellen Tauscher, crowed about it to the media.

This hardly amounts to a breakthrough win for party moderates — or a major concession by the speaker. But it was a consequential moment in the minds of moderate leaders who often find themselves marginalized in a caucus dominated by liberals.

“It shows we have bench strength, and it shows we can flex,” said California Rep. Ellen O. Tauscher, who chairs the New Democrat Coalition and played a central role in negotiations over the bankruptcy bill [...]

Moderates worry Pelosi is routinely staking very liberal positions to push House versions of big bills as far to the left as possible to enhance their standing in negotiations with the historically centrist Senate. This might be a smart tactic, but it often hurts Democrats who rely on Republican votes to win reelection. Put bluntly, it makes them look too liberal [...]

That prompted lawmakers, like Tauscher, to limit the scope of the bankruptcy bill as much as possible, even though this measure is only loosely related to the president’s broader proposal.

Tauscher’s New Democrat Coalition teamed with their natural allies in the Blue Dog Coalition to impose 10 significant changes, including requirements that bankruptcy judges use federal guidelines to determine the fair market value of a home and that modified loans must be “unaffordable and not just underwater” to prevent wealthy homeowners from taking advantage of the process, according to a widely distributed e-mail from Adam Pase, executive director of the New Democrat Coalition.

This, of course, angered some liberals. “The New Dems’ position is the banks’ position,” a senior Democratic aide involved in the bankruptcy negotiations complained on Friday. “New Democrats are shills for the banks.”

It's confounding that any New Democrat thinks their constituents give a ring-a-ding about banking industry concerns, and are not in fact the very people struggling to keep their homes that this legislation would help.

When Chris Bowers used Tauscher as the face of the moderate backlash against working people facing foreclosure, her office responded by saying they supported the rule on the bill (HR 1106), and that their changes would "strengthen" the bill, and that they didn't meet with anyone in the financial services industry about it. But David Waldman explains why that, simply put, is a crock - she voted for the rule because it incorporated the changes she wanted to make. And if that was the only hurdle, why didn't the legislation get a vote last week?

Now, that amendment was approved by the Rules Committee last Wednesday night, the 25th of February, and the rule was adopted on Thursday morning, the 26th. That locked in place that the voting on the bill would include a vote on an amendment incorporating Tauscher's list of changes.

So why, if she supports the bill, would work on it be suspended on the afternoon of Thursday, the 26th? She "supports the bill," and voted for the rule that locked in a shot at making the changes she proposed to the Judiciary Committee, and yet here we are, waiting over the weekend for... what, exactly?

Ellen Tauscher supported the rule because it made an amendment in order that would incorporate her list of demands. That's all. But she must clearly want more changes, because even after winning these concessions, the bill is still stalled, and the news reports on the stall have Tauscher's name all over them.

Jane Hamsher has a lot more on Tauscher, who is clearly putting banking industry interests ahead of her constituents'. She doesn't have to necessarily talk to anyone in the financial services industry personally, because Adam Pase, the chairman of the New Dmocrats, works out of her office:

Pase is is a former lobbyist for the Twenty First Century Group, whose client, the Coalition for Fair & Affordable Lending, is an astroturf group, financed by the banking industry, that lobbied on behalf of. . . you guessed it. . . sub-prime lenders. Contrary to what you might hear on Morning Joe, it was national civil rights leaders who joined together to fight the Coalition's predatory lenders as they tried to pass the Ney-Kanjorski bill, which would have enabled banks to get around predatory lending laws and make more bad loans. This they justified based on the oh-so-high-minded need to provide loans to low income and minority borrowers. It was true scumbaggery.

Pase was also the senior policy adviser for Dennis Moore when Moore organized Blue Dogs to oppose mortgage write-downs on behalf of the banking industry in 2007, and he is evidently the one driving policy on this one for the New Dems. But one has to wonder -- what is Tauscher thinking? Her district is one of the hardest hit by the mortgage crisis, as you can see from the map. Why is she trying to limit mortgage write-downs to subprime loans only, on behalf of banks, when every foreclosure brings down the value of all houses in a neighborhood? Her claim to care so very much about people still struggling to pay their mortgages rings hollow. 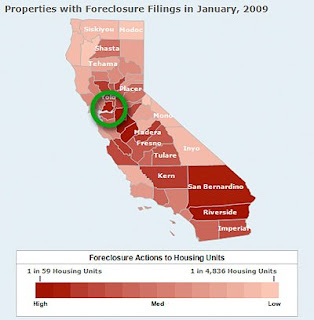 Shaun Donovan, the HUD Secretary, is headed to the House today to whip support for the bill. This legislation would save perhaps 800,000 families from foreclosure without one penny of cost to the taxpayer. All the bill would do is give leverage to homeowners who have been screwed by their lenders at practically every step of this process.

Homeowners burned by Blue Dogs and New Dems like Tauscher are not likely to forget the treachery. Firedoglake has some action items.

We're asking you to do two things:

Write a letter to the editor of your local papers (just enter your zip code) saying you expect your Member of Congress to represent you, not the banks, and you'll be watching to see if they oppose Tauscher and her bank lobbyist cronies.

Sign a petition to Nancy Pelosi telling her not to "buckle" to pressure from bank lobbyists working through greedy corporatist Members of Congress, and to act swiftly to give judges the authority they need to write down mortgages. The banks must take responsibility for their own bad judgment; taxpayers shouldn't be expected to pick up the tab.

These same people killed efforts in 2007 to allow bankruptcy judges to write down mortgages at that time, which could have helped us from ever getting to this place. It's time they stop pretending that they care about their constituents when they're only being tools of the banking lobby.

I think it's more about telling Pelosi we'll have her back if she stands up to these cretins. You know what to do.