Just Changing The Facade Of The Complex

Brian Beutler has the scoop that the media is reporting inaccurately. I know, I'm as blown away as you.

In other words, by retooling the Pentagon, Obama and Gates plan to move a lot of money around, but they also plan to increase the overall defense budget. In the final year of the Bush administration (and excluding the costs of the wars in Iraq and Afghanistan) the defense budget was $513 billion. In FY 2010, if Gates and Obama get their way, it will be $534 billion--$534 billion that will be spent much differently than last year's outlays were.

But you'd never know that from the news coverage.

Here's how Politico reports it:

"Now that Defense Secretary Robert Gates has rolled out major cuts to some of the Pentagon's largest weapons systems, the decision to accept or reject those changes falls on Congress....

With all the advance speculation about Gates' cuts, Rep. John P. Murtha (D-Pa.), chairman of the House Appropriations Defense Subcommittee, has already put forward a few recommendations of his own...."

Republican members of Congress are characterizing the budget changes as cuts, too.

Allow me to interrupt the great love-fest between liberal foreign policy bloggers and Bob Gates by stating the obvious - isn't the fact that the Pentagon budget is increasing, um, THE PROBLEM? And considering that the media-Congressional complex will characterize any effort to put an end to outdated Cold War-era weapons systems as a "defense cut", in the most irresponsible way possible, why aren't we limiting expenditures on a military budget that costs far more than any country on Earth, depriving us of the flexibility to pursue meaningful social investment? I think Ezra Klein has this right. 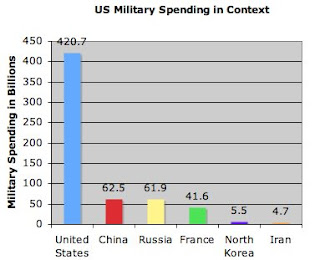 But though we know that Robert Gates' proposed military cuts will increase the value we get for our military dollars, we don't know if they will actually cut spending. Gates has announced his intention to end an array of wasteful programs, but we don't know if he means to replace them with new programs. We should have more clarity in a few days, when the Pentagon sends its budget up to the Hill. If Gates is leveraging his credibility to actually make cuts to the military's bloated budget, however, he'd deserve every encomium he's been given.

Right now, I'm not sure he deserves much for seemingly transferring that bloated budget from one set of contractors to another. For instance, the makers of the F-22 may not be happy today, but the makers of Predator drones, who will see a 127 percent increase in their spending, are giddy. While missile defense gets a cut that is intolerable to the likes of Joe Lieberman, we're still putting $800 million in taxpayer money into a system that doesn't actually work.

Let me say that there is much to like in the proposal - in particular the hiring of civil servants and firing of contractors who perform procurement - and maybe down the road, with the big lift of shiny weaponry out of the way, we can get around to balancing the unsustainably large and inefficient size of our military. But really, let's not go overboard with the "Obama and Gates go to China" talk, when together they increased the Pentagon budget.