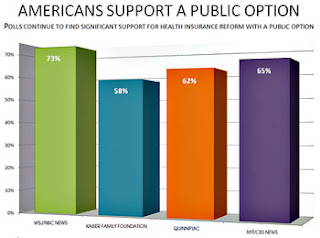 Kevin Drum is as shrill as he gets, which is to say, measured, polite, and miffed.

In case you missed it, Jon Stewart had a good riff on this last night. His question: Why are Democrats so lame? It's a good one! They have a huge majority in the Senate, the public is strongly in favor of a public option, and yet....for some reason they can't round up the votes to pass it. Hell, they can't even round up a normal majority to pass it out of the Finance Committee, let alone a supermajority to overcome an eventual filibuster.

If Democrats really do lose the House next year (about which more later), this will be why. If they don't pass a healthcare bill at all, they'll be viewed as terminally lame. If they pass a bill, but it doesn't contain popular features that people want — like the public option — they'll be viewed as terminally lame. At a wonk level, a bill without a public option can be perfectly good. But wonks aren't a large voting bloc, and among people who do vote, the public option is very popular. So, um, why not pass it?

I will minimally defend Democrats. The Finance Committee has a 13-10 split, which is a bit less of a majority than the 60-40 overall split. Stewart's point was that Democrats had a supermajority and didn't use it in the Finance Committee is inaccurate. Furthermore, there's no such thing as a supermajority in the patently undemocratic confines of the Senate. Because the public option isn't popular among land as well as people, it doesn't have 60 votes in a Senate organized around land. There's also the problem of unanimous opposition from an entire political party, which really does represent a crisis of governance.

That said, yes! Democrats are lame! Especially in this case, where they have a popular policy that also happens to be the policy that best brings down costs and provides competition in the insurance market. As for Drum's point that a bill without a public option can be good at a wonk level, he's talking about something like the Swiss health care system, where private insurers exist without a public alternative, but are strictly regulated. Which is perfectly fine except for a few things:

1) It is the second-worst system in the world in terms of costs, rivaled only by... the United States.
2) We have no history of regulatory strictness, in fact we have the opposite history, so actually pulling off a regulation-based check on the insurance companies is a real long shot.
3) The Swiss have higher co-pays, insurance premiums and out-of-pocket expenses than Americans, which politically would not fly at all. People are already crushed by the burden of high-dollar health care here.

The truth is that the difficulty of Democrats to include a public option - though I don't think it's dead yet - reflects the breakdown of our political system and the influence of corporate money. The Swiss have their health care plan because they put it in place relatively recently, and the large health interests didn't want a public component. It's the same here, and frankly politicians in both parties have been bought off.

As I said, I don't think this is quite over. Labor won't budge on their insistence on a public option, and for a White House obsessed with keeping their majority that's a big deal - lose the support of the AFL-CIO and you lose seats, period. What's more, progressives understand the pressure points now - mainly, the White House and Harry Reid. If he includes a public option in the merged Senate bill it will be very hard to get it out, and then Senators will be faced with the unpleasant choice of filibustering a bill that has the overwhelming support of the Democratic caucus and the White House to protect insurance company profits.