Today on Hardball, Ike Skelton advanced a familiar argument in Washington, not just now but over several decades, about the presumed consequences of failure that are always brought out as an argument for escalating warfare and continued foreign policy intervention:

IKE SKELTON: What will happen if the Taliban regains hold in either part or all of Afghanistan, just bet your bottom dollar, as sure as God made little green apples, the Al Qaeda terrorists will go back in there and have a safe haven from which to plan, plot and attack America and American interests, wherever they may be. And consequently we have to finish the job. The job should have been finished back in 2002, and put the resources there were put into Iraq, and sadly they were not. And now the war really begins as a result of President Obama giving a strategy speech. And hopefully he will listen to the recommendations of his commanders.

This is a lie, and I can prove it.

We know right now that there are no signs of Al Qaeda in Afghanistan. As long as we're listening to the commanders, General Petraeus said this back in May, and so has General McChrystal just last month. Both of them maintain that Al Qaeda maintains undefined "links" to insurgents, but they aver as an absolute that Al Qaeda forces are not in the country, having moved to areas of western Pakistan and the border region. Just today, the President said that Al Qaeda has less than 100 core fighters overall and has "lost operational capacity," and that their presence has diminished significantly in Afghanistan.

And yet, we know right now that the Taliban controls as much as 80% of Afghanistan. This report by the International Council on Security and Development from September of this year authoritatively estimated this:

“The unrelenting and disturbing return, spread and advance of the Taliban is now without question,” said Norine MacDonald QC, President and Lead Field Researcher for ICOS.

The new map indicates that the Taliban insurgency has continued to expand its influence across Afghanistan. “The dramatic change in the last few months has been the deterioration of the situation in the north of Afghanistan, which was previously one of the most stable parts of Afghanistan. Provinces such as Kunduz and Balkh are now heavily affected by Taliban violence. Across the north of Afghanistan, there has been a dramatic increase in the rate of insurgent attacks against international, Afghan government, and civilian targets“, stated Mr. Alexander Jackson, Policy Analyst at ICOS. 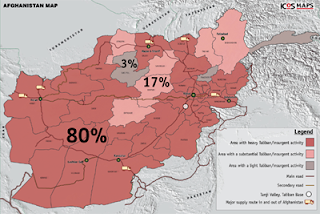 So the Taliban has been in control of at least half the country for at least two years, more than enough time for Al Qaeda to pack up from the border region and reinstall themselves into these safe havens. Skelton stated specifically that if the Taliban regains hold in "all or part of Afghanistan," Al Qaeda would return to plot attack. Well, the Taliban control 80% of the country. But Al Qaeda aren't there. They don't need to be.

This persistent lie about Al Qaeda's aims in the region underpins the entire case for escalation, just the way the domino theory underpinned consistent troop buildup in Vietnam. And yet nobody in the media, up to and including Chris Matthews today, has bothered to challenge this basic falsehood. Nobody has asked the question, "If Al Qaeda is so desperate to find a safe haven, why haven't they returned to Afghanistan now, when the Taliban controls 80% of the country?" It's not like they aren't under as much threat from drone attacks in Pakistan as they would be in Afghanistan.

Will anyone present these basic facts to the "serious foreign policy" dittoheads when they go on and on with a demonstrably false argument about safe havens and how we must send as many troops as possible into danger or we'll all be killed in our beds?