In August 2001, before 9/11 changed everything, the only American lives this President deeply cared about, the only ones he spent more than five minutes thinking about, the only ones he felt honor bound to protect, were blastocysts. Like some tragic King Lear figure, he torturously furrowed his brow, consulted spiritual leaers for guidance, and came to the agonizing decision to only keep existing stem cell lines open for research, denying federal funds to any scientists who wished to start new lines through therapeutic cell cloning or any other method.

The ethical dilemma surrounding stem cell research is a ridiculous doomsday scenario stoked by our science-fiction-addled culture. We're talking about creating treatments at the cellular level. This is named human embryo cloning but it's not "Multiplicity." It's a technique whereby healthy cells could replace defective ones in the human body and ensure longer life. It could dramatically reduce diseases like Hodgkin's and Parkinson's and leukemia and a host of others. But look what our President says about it:

"I'm very concerned about cloning,'' Bush told reporters in the Oval Office. "I worry about a world in which cloning becomes acceptable.''

As if the fucking Brundle-fly is around the corner. Not only is nobody suggesting human cloning, most responsible scientists doubt that it's even biologically possible. The anti-intellectualism that presumes "mad scientists" won't be able to help themselves from making armies of genetically perfect mercenaries is straight out of comic books. It simply bears no resemblance to reality. But it strikes a chord with the millions who watched "X Files" with interest and make the ignorant logical leap that those power-driven meanies with the white lab coats are going to unleash their undead minions upon us. That's how this kind of irrational fear breeds.

(Bush said) "I made it very clear to the Congress that the use of federal money, taxpayers' money to promote science which destroys life in order to save life is - I'm against that. And therefore, if the bill does that, I will veto it.''

And with that, especially if he actually does use the first veto of his Presidency to stop funding medical research, we can dispense with all pretense and tell it like it is: George W. Bush is avowedly pro-death.

This isn't just a frame, it's the honest-to-goodness truth. With this threatened veto, Bush shows that he doesn't want to heal you if your injuries or illnesses are debilitating. He doesn't want you to have health insurance, either; at the very least he's done nothing to stop you from losing it. The ranks of the uninsured has gone up in his tenure. With the fraying of the social safety net and more and more poor people unable to care for children, the ranks of the poverty-stricken has risen. In addition abortions have gone up during his tenure. If you're not pre-natal or on a feeding tube (wait, I forgot about Sun Hudson, if you're on a feeding tube you can afford), George Bush doesn't want anything to do with your life.

We already know that he prefers war over diplomacy, making war inevitable months before attacking (see a little thing called the Downing Street Memo). However, if you commit a crime, he'd rather kill you than have you serve time, having executed more prisoners than any governor in history.

p.s. Digby does what took me 500 words to say in the space of two images.

All Hitler All Day

I really don't want to hear it anymore from Republicans about how Democrats have poisoned the national discourse with all of those references to Bush and Nazism. We all know by now that Rick Santorum (R-Man on Dog) used the very same allusion while discussing his Democratic colleagues in the Senate.

I can't tell you how many conversations with Republicans, online and offline, begin and end with "You guys are out of control, you think Bush is Hitler." Well now we have a Senator, a Republican Senator, doing the same thing.

Look, somewhere in the last 60 years it became much easier for rhetorical practitioners to use Hitler as a code word for evil. The notion that only one group of people employ this technique is absurd. This isn't about comparing Democrats to Nazis (at least to me, I could care less), it's about the hypocrisy of using that with you decry in others.

By the way, this is my first posting in days because of major Internet problems. It also happens to coincide with my highest ever traffic numbers. Ironic, huh?

I'd say call your senators and donate to ad campaigns, but I really think this is happening inside the impenetrable Washington bubble. Due to the math of the Senate, 12 senators (6 Dems an 6 Repubs) can rule the body. There are rumors of a deal along those lines. Like I've said before, only Frist loses on a compromise (see my other posts on the subject).

I guess C-SPAN is covering everything live. I think the only thing worthwhile to do is join PFAW's flash mob, and be ready to jam the switchboard if this thing goes through.

This brouhaha over Newsweek's retraction of their brief article is classic misdirection. It is well-established that the story of Guantanamo interrogators flushing copies of the Koran down the toilet (and generally desecrating them) is well-known. It's at least a three year-old story. In fact, it's even MORE well-known in the Muslim world than it is here. Numerous released prisoners have related these allegations. And if they were released, it means the US government had nothing on them, so it means they were not terrorists, despite the racist musings of sites like Little Green Footballs that claim "Well, it's in the Jihadi Handbook to make wild charges against the infidels." I'm not saying the detainees don't have reason to be vengeful, and should be trusted implicitly (although the fact that different detainees make similar charges about different locations without consulting one another is pretty damning). But here's the thing: Newsweek may be among the first, but they are not the only news organization to cite a US source corroborating the charges. The Raw Story found a New York Times article that says:

"A former interrogator at Guantanamo, in an interview with the Times, confirmed the accounts of the hunger strikes, including the public expression of regret over the treatment of the Korans,"

In addition, this interview with former Arabic translator at Guantanamo Erik Saar shows abuse that, while not specifically mentioning the Koran desecration, shows that a central tenet of interrogation was "to create a wedge between the detainee we were speaking with and his faith."

And Juan Cole gets an exclusive from a former military officer, who claims that in interrogation practice sessions, Army officials trashed the Bible in a similar way:

The course I attended . . . [had] a mock POW camp, where we had a chance to be prisoners for 2-3 days. The camp is also used as a training tool for CI [counter-intelligence], interrogators, etc for those running the camp.

One of the most memorable parts of the camp experience was when one of the camp leaders trashed a Bible on the ground, kicking it around, etc. It was a crushing blow, even though this was just a school.

I have no doubt the stories about trashing the Koran are true.

Newsweek had the first high-level source to confirm the story. Then, after it was blamed for causing riots in the Muslim world, he changed his story. I wonder if there was any pressure from the White House for him to do that? So the difference is in the sourcing.  A sourcing, mind you, that changed his story.  To my knowledge the detainees in question never changed theirs.  Who's credibility is higher?

Newsweek went through their normal vetting process, giving the story to a high-level Pentagon official, who let it pass. If it's the case that the White House let the story go to make Newsweek look bad, that's about the slimiest thing I've ever heard (and the dumbest, given the consequences in the Muslim world).  If you apply Occam's razor I think it's clear this was all done after the fact.  After the uptick in violence because of the story the senior official who gave Michael Isikoff the tip was pressured to recant, knowing that (him being the only source) it would force Newsweek to recant, and thereby making Newsweek the story in the US rather than the Koran incident itself.

The M.O. of this White House is plausible deniability, and that's all that's going on here.  It's also to attack the source, to get outraged at the outrage, rather than look at the root cause.  The White House had no interest in suppressing similar stories from the Philadelphia Inquirer and others, because none of them started riots.  Once things got out of control in the Muslim world, it was time to bring the hammer down on the high-level source.  Never mind the fact that the Pentagon vetted the story before it ran and saw no reason to challenge the allegation then. 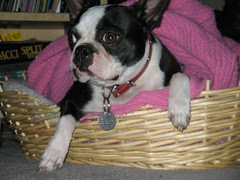 I didn't have Internet access all day today (moved to a new office building, they didn't even have a refrigerator in the kitchen yet), and it's amazing how I was jonesing like a smack junkie. It felt completely out of place to be so underinformed for an entire day. Now I know how a goodly portion of the country feels.

Be back in a sec with some biting commentary!