Not One Republican Vote

Post-partisanship lives. The stimulus package just passed the House, with the billions in corporate tax cuts, without the money to re-sod the National Mall, without the money for family planning for poor people, and without one Republican vote. Without one. Final vote was 244-188 as 11 "Democrats" crossed over. According to Pete Hoekstra's Twittering, that means they win!

Interesting! The bi partisan vote on stimulus was no. It wasn't the winning vote but the only vote that received both R and D votes.

During the debate, Republicans offered a substitute amendment which had flat tax cuts (including for the wealthy) and eliminated a good portion of the spending. Earl Blumenauer:

“I’m glad, however, that they’ve offered this alternative because it puts in clear relief what their priorities are - take money away from 95% of the American public and invest in the few who need it the least. Take money away from 4 million students who would have this tax relief. And my favorite, is actually continue to game the alternative minimum tax to purposely push more people into it, with tax gimmicks -rather than work with us in fundamental tax reform that doesn’t subject more people, and give us this biannual charade.”

I don't know how you can come away from this sideshow thinking anything but that Republicans are determined to have their depression and openly wish failure upon the United States. Americans seem to have gotten that message too; it's why Democrats have a 24-point generic ballot lead at this point for the next election.

Of course, that won't hold forever. And that's especially true if the economy is still sour in 2 or 4 years. Ultimately that will be the judge, not if some random re-sodding of the National Mall feature is in or out of the bill. So pre-compromising to attract non-existent Republican support was, in a word, insane. Now Obama had better hope those Republican ideas (which aren't overwhelming, but they're still there) baked into the package work. I'm not holding my breath.

And let's hope that, in the future, the only people who sill listen to the ideas of Republicans are cable news talent bookers.

...only five states are now reliably Republican. Alaska, Idaho, Wyoming, Utah and Nebraska. I would add "Georgetown cocktail parties" to that. 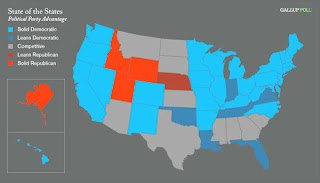